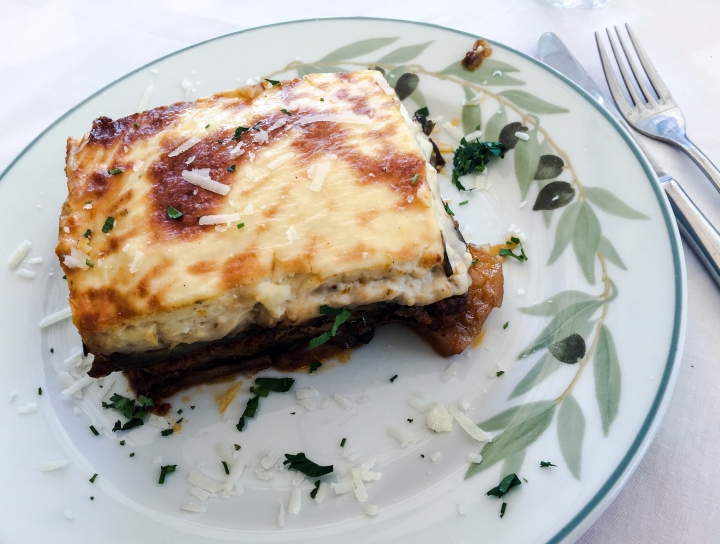 Everyone wants to go to Greece to witness the islands, with their spectacular beaches, the stunning views of whitewashed houses climbing up seaside cliffs and jaw dropping sunsets over the ocean’s horizon. But I have another reason for you to travel to Greece – the incredibly delicious Greek food!

Greece is blessed with a hot, dry Mediterranean climate that sets the tone for locally grown, fresh and simple ingredients that pack an enormous punch of flavor. Fishermen pluck an array of fresh seafood from the Mediterranean daily. Farmers cultivate lemons, tomatoes, eggplant, artichokes and other fresh fruits and vegetables. Local sheep produce decadent cheese and yogurts. And although Greeks don’t eat each as much meat as some other cultures, they still figured out how to create mouthwatering lamb, pork and chicken dishes. Many Greek sweets are doused in honey, a throwback to the ancient gods’ love of ambrosia and nectar. Though mortals weren’t allowed to eat those two items, honey was served as a most welcome substitute.

After visiting Greece I have an even deeper love and appreciation of their cuisine and wanted to share a few of my favorites, in no particular order:

Horiatiki Salad – Also known as Choriatiki, or a village salad, a traditional Greek salad is much different than those you’re used to in the States or Canada. This beautifully refreshing dish is chock full of fresh, crunchy tomatoes, cucumbers, onions and peppers. Soft kalamata olives and a slice of feta cheese add the perfect salty bites. Typically, this salad is dressed only with salt, oregano and amazing golden olive oil. You won’t find any iceberg lettuce, pepperocini or seasoned salad dressings in Greece and believe me, you won’t miss them one bit. One word of warning though, once you try the real thing, you’ll never want an Americanized Greek Salad again!

Moussaka – Perhaps one of the most famous Greek dishes, moussaka is comfort food to the max. Picture layers of eggplant slowly sautéed in olive oil, ground lamb mixed with tomatoes and spices and a generous top layer of decadent béchamel sauce all baked to perfection until it’s a beautiful golden brown. Yeah, it’s hard to not want to stick your fork into the computer and take a bite, right?

Kalamata Olives – Can we just talk about how amazing these olives are? They taste a million times better in Greece than back home. They’re so good, in fact, that there is a city named after them in the southern Peloponnese of Greece. I’m just kidding. Actually, the olives were named after the city, which is where a large concentration of these black beauties are grown. Olives are so important to Greek cuisine, that in some shape or form, olive and/or olive oil makes an appearance in almost every Greek dish. And often, a handful of marinated Kalamata olives is the perfect snack. Seriously, I recommend eating lots and lots of olives!

Diples – The folks from the Peloponnese must be commended for taking simple ingredients and making them incredibly delicious. Enter the diple, which gets its name from the Greek word for “fold.” This delightfully simple dessert is made of thin sheet-like dough which is cut into long, thin strips. It is then placed in hot oil, “folded” and fried before being drizzled with honey syrup and finished with a generous sprinkling of nuts. This festive dessert is very popular around Christmas time throughout Greece.

Bouyourdi – This is a dish I had never heard of before visiting Greece, but when I saw baked feta with tomatoes and chilies on the menu I knew I had to try it. And boy am I so glad I did! This quickly became one of my favorite dishes of the trip. Most often served as a meze, or Greek appetizer, your bouyourdi may come out slightly different depending on which part of Greece you are in, but essentially it is a large chunk of feta cheese tossed with fresh tomatoes, some sort of chili peppers, olive oil, oregano and baked until the feta is warm and melty. The cheese blends with the tomatoes to create a rich, creamy sauce that you can either use as a dip for warm pita bread or eat by the spoonful. I can’t lie, I did both and enjoyed every delicious bite!

Keftedes me Saltsa Domata – Keftedes are the Greeks version of the meatball. Beautifully flavored with garlic, red onion, fresh parsley, mint and hint of dried oregano, these oblong-shaped meatballs are crispy on the outside and soft and juicy on the inside. Most often, you’ll find keftedes served as an appetizer accompanied by tzatziki and pita bread. Another incredibly delicious preparation is Keftedes me Saltsa Domata, which loosely translates to meatballs in tomato sauce. This dish will give the Italian spaghetti and meatballs a run for its money any day.

Real Greek Yoghurt – I’m sure by now you’ve probably heard all about the “Greek yogurt” controversy. A version of the Greek’s creation is being advertised and sold all over the world as “Greek yogurt.” This is pretty offensive to the Greeks and they are starting to get really upset about it. Honestly, I can’t say I blame them. Once you’ve tried yoghurt in Greece you’ll understand. Let me try to explain. Authentic Greek yoghurt is made of pure sheep’s milk in small dairy units. Thick, creamy and super tasty, this yoghurt is very high nutritional value, including calcium, phosphorus, complex B vitamins and proteins, and has always been one of the finest products of the Greek farming tradition since the ancient times. The Greek yogurt that is being sold commercially across Europe and North America is made from cow’s milk, which is usually either strained or semi-strained. It should really be sold as Greek-style yogurt. If you like “Greek yogurt” please don’t let this stop you from enjoying it. But prepare to taste the cream of the crop (no pun intended) when you try this in Greece. It really is that amazing!

I’ll leave you here for now. But there are so many amazing foods in Greece that this is only the tip of the iceberg. I’m planning a part two (and maybe three) in the near future  –  so stay tuned!

Have you been to Greece? What was your favorite Greek food? 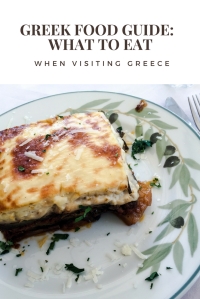 38 thoughts on “Greek Food Guide: What to eat when visiting Greece”

Went to Abu Dhabi this weekend and saw the most beautiful mosque in all the land. This gorgeous work of art features 82 domes, more than 1,000 columns, 24-carat-gold gilded chandeliers and the world's largest hand-knotted carpet.🧵
Seriously, Dubai is pretty amazing... especially at sunset. But it’s HOT! Tell me, where is the hottest place you’ve ever been? ❤️🧡💛
Dubai is hot AF. I spent the weekend popping in and out of air conditioned places trying to see some things and not die of heat exhaustion. This lovely little place is a more modern recreation of the Old Dubai souks. But how about that view of the Burj Al Arab, the only 7 star hotel in the world! The cheapest suite is $1,000 USD per night and if you want to stay in the Royal Suite, it will cost you $24,000 USD per night. Every guest gets their own 24 carat gold iPad to use during their stay.💰
When I’m traveling, I love discovering fun coffee shops around the world, but when I’m at home, I drink the coffee that always transports me back to where I’ve had the best coffee of my life – Italy! Since @LavazzaUSA is Italian for coffee, it’s a no brainer. Where have you had the best coffee of your life? ☕️ #sponsored #lavazzacoffee #coffee #coffeetime #coffeelove #coffeeaddict #caffeinecouture #coffeeshots #coffeeculture #coffeegram #coffeebreak #coffeeholic #coffeeflatlay
Everyone loves Positano but Sorrento was a bit less crowded and touristy and charmed me just as much. And as the true home of Limoncello, producing the best lemons in the world, why would you ever want to leave?🍋
Celebrating America the beautiful today! Happy 4th of July! 🇺🇸
Loading Comments...
Comment
×
%d bloggers like this: