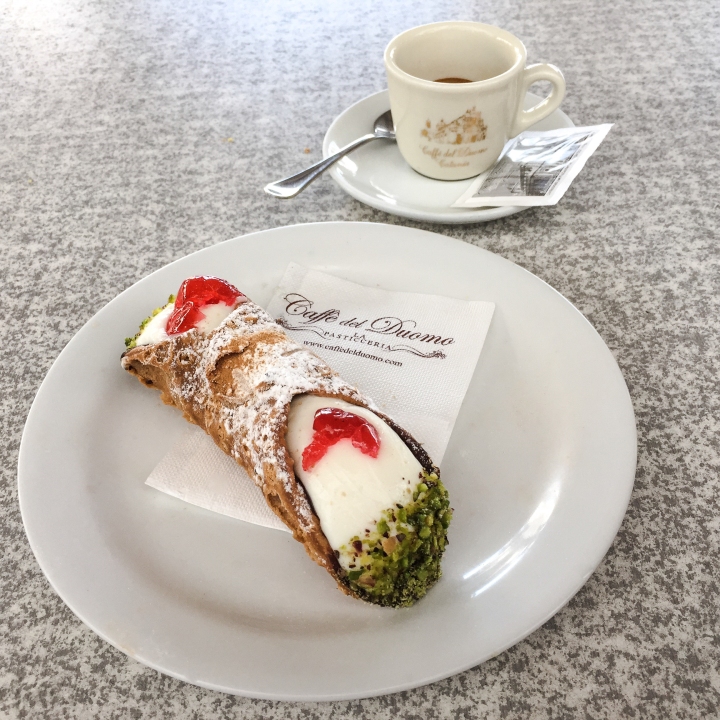 Having already travelled to several parts of Northern and Central Italy, I thought I knew a thing or two about Italian food. Boy, was I wrong! Sicilians identify first as being Sicilian, then Italian, so their cuisines are vastly different from what you might find on the mainland. Not to mention, Sicily has been ruled by everyone from the Arabs to the Normans, so its cuisines have inherited a bit of each of it’s ruling cultures. And finally, thanks to its resident volcano, Mt. Etna, Sicily is an incredibly fertile island growing everything from olives and pistachios to oranges, lemons, eggplant and tomatoes. Because of all of this, Sicily’s cuisines is varied, incredibly fresh and absolutely delicious! Here are a few of my favorites:

Sfinciuni – One of the best things I ate in Sicily was a soft flatbread with caramelized onions and tomatoes, called sfinciuni or Faccia Vecchia. Sfinciuni means “old woman’s face” in Sicilian, probably because the finished bread has an old, wrinkled look. The origins of sfinciuni go back to before the Greeks controlled Sicily. It originally started out as a plain bread that working people would take for lunch. It’s evolved over time and is now typically made with onions, tomato, anchovies, cheese and finished with a drizzle of olive oil. You might think it’s similar to a pizza, but it’s thicker and has a good crunch, almost more like a focaccia bread.

Cassata – Also known as Cassata siciliana, this is a traditional Sicilian sweet consisting of round sponge cake moistened with fruit juices or liqueur and layered with ricotta cheese and chocolate chips. It is covered with a shell of marzipan, pink and green pastel colored icing, and decorative designs. The cassata is topped with candied fruit depicting cherries and slices of citrus fruit characteristic of Sicily. If you have a sweet tooth, you’ll love this dessert. If not, you might be overwhelmed by just how sweet it is.

Pasta alla Norma – This traditional Sicilian pasta dish is made with sautéed eggplant tossed with tomato sauce and topped with ricotta salata, or salted ricotta. The lore of its origin goes back to a 19th-century composer, Vincenzo Bellini. He was born in Catania, Italy, and was an artist of great renown who composed many operas. One of his most lyrically beautiful and famous was called “Norma.” Apparently, he also liked eggplant! This dish was so simple, but because the ingredients were so fresh it was amazing. I could eat it every day if I lived in Sicily!

Pistachios – If you like pistachios you will truly be in heaven in Sicily & Southern Italy. There is a little town called Bronte, at the foot of Mt. Etna, that grows the most heavenly pistachios. Locals call them green gold and they are literally used in everything. I tried pistachio gelato and completely spoiled my palette because now, I cannot seem to find anything with as much flavor and freshness as the ones I had in Sicily. Also, don’t miss pistachio crusted filet and pasta al pesto di pistacchi, a delicious pasta dish where they use pistachios instead of pine nuts to create a delectable pesto sauce.

Arancini – Arancini are golden fried balls of rice found widely across the Sicily and other parts of Italy. Commonly sold as street food, these little balls of love are usually stuffed with meat, peas and mozzarella, coated with a light, crispy batter of breadcrumbs and then fried in olive oil until they are golden and crunchy. Their Italian name comes from the Italian word for orange (arancia), which they faintly resemble in colour and texture. To me, arancini is like crack. I could eat them for breakfast, lunch and dinner! Good thing I don’t live in Italy!

Cannoli – Although we refer to one of these delicious pastries as “a cannoli,” the singular form is actually cannolo, meaning “little tube.” Cannoli are fried, tube-shaped pastry shells filled with a sweet, creamy filling, most usually ricotta. Cannoli first originated in Palermo when Sicily was under Arab control. Because it was important to the Italians to make their local food stand out, they created cannoli for Carnivale, a important festive season right before lent, as a fertility symbol of the festivities. Nowadays, cannoli is enjoyed throughout the year and is thought of as the ultimate Sicilian dessert.

Heading north to Rome next? You will definitely want to try some of the best food in Rome before you go.  Buon Appetito!

Have you been to Sicily? What was your favorite Sicilian food? 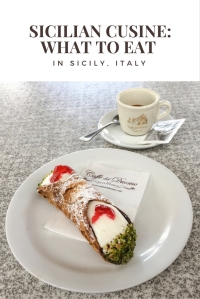 56 thoughts on “Sicilian Cuisine: Must try foods of Sicily, Italy”

Went to Abu Dhabi this weekend and saw the most beautiful mosque in all the land. This gorgeous work of art features 82 domes, more than 1,000 columns, 24-carat-gold gilded chandeliers and the world's largest hand-knotted carpet.🧵
Seriously, Dubai is pretty amazing... especially at sunset. But it’s HOT! Tell me, where is the hottest place you’ve ever been? ❤️🧡💛
Dubai is hot AF. I spent the weekend popping in and out of air conditioned places trying to see some things and not die of heat exhaustion. This lovely little place is a more modern recreation of the Old Dubai souks. But how about that view of the Burj Al Arab, the only 7 star hotel in the world! The cheapest suite is $1,000 USD per night and if you want to stay in the Royal Suite, it will cost you $24,000 USD per night. Every guest gets their own 24 carat gold iPad to use during their stay.💰
When I’m traveling, I love discovering fun coffee shops around the world, but when I’m at home, I drink the coffee that always transports me back to where I’ve had the best coffee of my life – Italy! Since @LavazzaUSA is Italian for coffee, it’s a no brainer. Where have you had the best coffee of your life? ☕️ #sponsored #lavazzacoffee #coffee #coffeetime #coffeelove #coffeeaddict #caffeinecouture #coffeeshots #coffeeculture #coffeegram #coffeebreak #coffeeholic #coffeeflatlay
Everyone loves Positano but Sorrento was a bit less crowded and touristy and charmed me just as much. And as the true home of Limoncello, producing the best lemons in the world, why would you ever want to leave?🍋
Celebrating America the beautiful today! Happy 4th of July! 🇺🇸
Loading Comments...
%d bloggers like this: