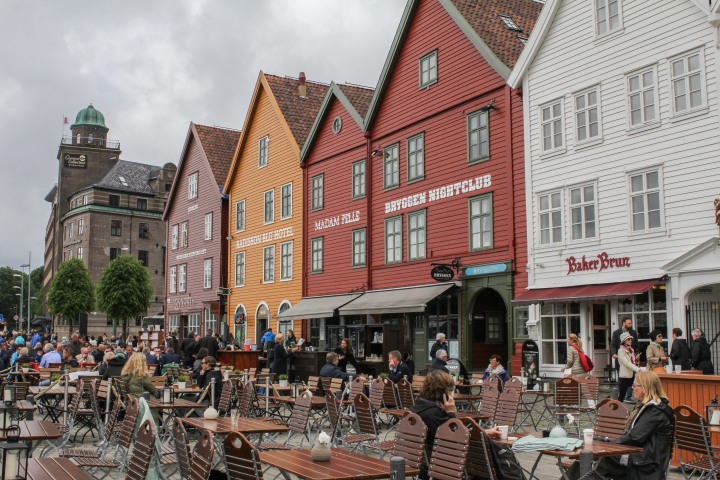 Bergen, Norway has been given many nicknames over the years. It is well know for being the “gateway to the Fjords.” Some have called it “the most beautiful city in the world.” And others warn not to forget your umbrella because Bergen is also “the rainiest city in Europe.” While all of those things are true, Bergen has so much more to offer.

If you’re heading to Bergen, I’m going to assume you are already going to take a cruise of the Fjords or embark on the Norway in a Nutshell bus, train and cruise adventure, so I’m not including them on this list. But if for some reason you’re not, do it! The Fjords were truly spectacular and absolutely the highlight of my time in Bergen. Here are a few other things you must not miss when visiting this amazing city:

1. Fløyen
Yet another nickname for Bergen is “the city of the Seven Mountains.” While trying to visit all of them would be quite a feat, you should try to visit at least one during your stay. The most popular of which is Fløyen. Easily accessible from Bergen’s city center, you can either hop on the funicular, Fløibanen, for a ride to the top in less than eight minutes or hike up. Once there, you’ll enjoy incredible views of Bergen and the Fjords below. There is also a lovely gift shop and Fløistuen Café at the top where you can relax and enjoy a coffee with stunning views. Your children will love frolicking in the playground guarded by one of Norway’s many trolls. You may want to enjoy one of ten suggested hikes into the mountains. When you’re done, either take Fløibanen back down or enjoy a leisurely walk down the mountainside.

2. Bryggen
It’s highly unlikely you’ll miss the the colorful façade of Bryggen. The old Hanseatic Wharf has been a place of both cultural and economic significance for centuries. First established in the 14th century, Bryggen was rebuilt after a fire in 1702 and is now recognized as a UNESCO World Heritage site. There are several places to find a seat, order a coffee or beer and people watch. I enjoyed sitting and really taking a closer look at the colorful buildings. It’s amazing to see how much some of them are leaning over, yet somehow still remaining to stand, given a helping hand by their neighbors.

While it’s almost impossible to visit Bergen without strolling down the main street in front of the wharf, plan to spend at least an hour exploring the narrow alleyways behind the facade, which now house an assortment of restaurants, shops and galleries. I even discovered a fantastic little coffee shop called Kaf Kafe, tucked into a corner of the old wooden houses, which serves an incredible matcha latte.

3. Bergen Fish Market, Fisketorget
Because one side of Norway is almost entirely surrounded by water, the fishing industry has always been extremely important to it’s livelihood. Located right in front of Bryggen at the head of the wharf, the outdoor Fish Market, or Fisketorget in Norwegian, offers a lively atmosphere and a colorful selection of some of the best treasures of the sea, along with some you may have never seen before, such as shark and whale. You can also find mounds of fresh fruits and vegetables, caviar, handicrafts and even reindeer sausages for your tasting pleasure. Many of the stands display prepared plates to order, but you can also just pick out whatever you like from the display case and they will cook it up right there for you. I chose an array of shellfish cooked in a garlic wine sauce and it was incredibly delicious. However, it was not cheap so make sure you do the conversions ahead of time!

4. Stølen
After a hearty seafood lunch you might want to go for a little walk and get away from the crowds. My recommendation would be to head up past Bryggen and take a stroll through the beautiful cobblestoned streets in the neighborhood of Stølen. You’ll get a feel for what it’s like to be a resident of this beautiful city. A lot of the streets had rows of incredibly charming pastel colored houses. However, one of my favorite streets was this one that had only white houses and an adorable little feline who welcomed me to the neighborhood with his friendly meows.

I also stumbled upon some fantastic street art. If you know me, you’ll know this made my day!

5. Explore Bergen’s Street Art
Since I was a little surprised to see such amazing art in this otherwise very clean and polite country, I did a little research and found that Bergen is actually considered the Street Art capital of Norway! Who knew? I learned that Bergen is home to an artists’ collective called BART, which brings together around 25 of Bergen’s street artists to make Bergen a more colorful place. The city even gives grants for international street artists to come and paint in Bergen. BART works to get walls for them, and arranges collaboration with local street artists. So as you’re walking around the city, keep your eyes peeled for these big and bold pieces of art!

6. Enjoy Bergen’s “skyline” at night
Ok so Bergen doesn’t really have a skyline per say, but what it does have is beautiful. Take a walk over to the other side of the wharf, opposite Bryggen, after dinner for breathtaking views of the harbor and Bryggen’s colorful buildings lit up and glowing in a golden light. The reflections from the lights and the boats on the water create a virtual rainbow. Pictures are lovely but it’s even more breathtaking in person. Believe me, it’s something you won’t want to miss. Depending on what time of year you’re visiting you may have to wait until very late to experience it, but I assure you it is worth it.

7. Visit a Stave Church
Among Norway’s most striking historical buildings from the Middle Ages are its wooden stave churches. According to UNESCO they are, “one of the most elaborate and technologically advanced types of wooden construction that existed in North-Western Europe during the Middle Ages.” There were once more than 1,000 stave churches in Norway, but now only 28 remain. One church that is fairy easy to visit from Bergen is the Fantoft Stave Church. It was originally built in 1150 but was completely destroyed in a fire in 1992 and rebuilt in intricate detail. Although it’s a reproduction, it is still a spectacular example of early Norwegian art, design, and heritage. The church can be reached by taking the Bergen Light Rail to Fantoft. Admission is 60 NOK but both the light rail and the church admission are free if you’ve purchased the Bergen Card.

Did you know? Bergen claims to have the largest tree in Norway. It is a 100 year old tree on the slopes of Mt Fløyen, at the Hestebergveien path. This area was totally barren 100 years ago when a tree-planting program was started. The hills of Bergen and Mt Fløyen are now covered in big trees, growing fast due to mild climate and generous rain.

Need a place to stay in Bergen? Check out my review of the Magic Hotel Solheimsviken. It was truly magical! 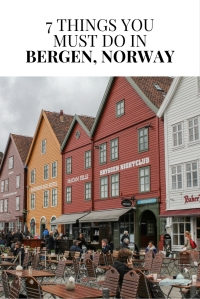 17 thoughts on “7 things you must do in Bergen, Norway”